Annotation Is Now a Web Standard

Annotation Is Now a Web Standard

Many have tried over the years to bring us web annotations. The lack of standards has been one of the key things holding these efforts back– a need we highlighted in the first of our 12 original principles back in 2013 and have been working towards ever since.

Yesterday, on February 23, things took a giant leap forward when the W3C, the standards body for the Web, standardized annotation.

Twenty four years after Marc Andreessen first built collaborative annotation into Mosaic and tested it on a few “guinea pigs” before turning it off, annotations have finally become first-class citizens of the web.

“Many websites already allow comments, but current […] systems rely on unique, usually proprietary technologies chosen and provided by publishers. Notes cannot be shared easily across the Web and comments about a Web page can only be saved and viewed via a single website. Readers cannot select their own tools, choose their own service providers or bring their own communities.”

So what exactly does this mean for you?

Comment widgets may soon become a thing of the past.

The W3C standards (called Recommendations) are a key milestone towards a future in which all pages could support rich layers of conversation without requiring any action by their publishers—because that capability can be built into the browser itself and be available as a native feature, just like web search. The shared vision is that conversations will be able to happen anywhere on the Web, or even on documents in native apps, and inline instead of below-the fold, in a federated, standards-based way. 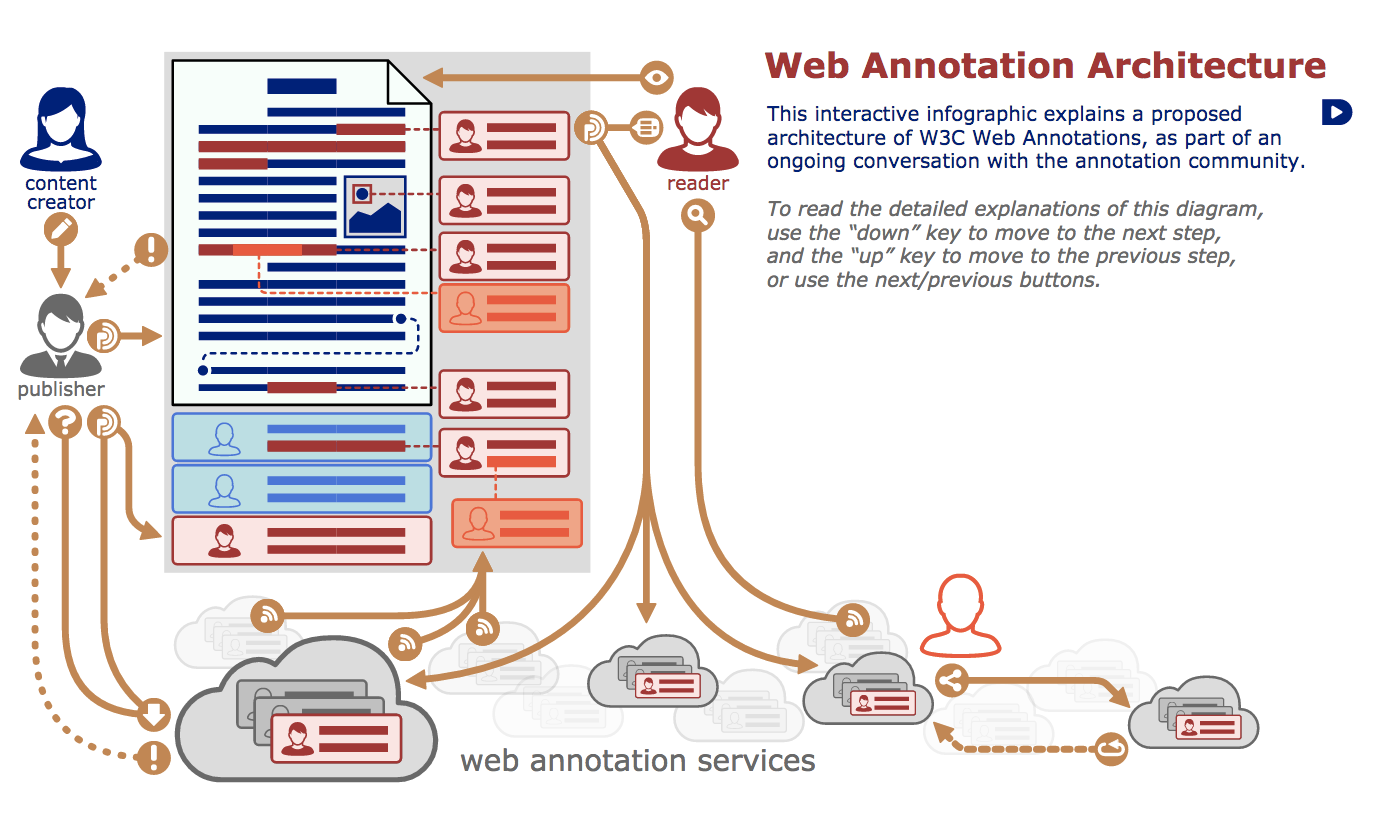 While Hypothesis and others are already enabling annotation to take place over any page on the Web, a standard means that there is additional incentive for browser vendors to include this functionality natively. The more that these new collaborative layers are present without any additional action on the part of the user, the more their use will grow.

While many applications, from PDF readers and Google Docs to the Kindle, support some kind of annotation functionality, what the W3C formalized yesterday is fundamentally different. The W3C architecture provides for a model where annotations live separately from documents and are reunited and reanchored in real-time whenever the relevant document is present. The benefit of this is that annotations now come under the control and election of the user, rather than at the sole discretion of the publisher. Whereas previously annotation was likely a solitary act when implemented in a native app, or the most public act when it took place in a Disqus or Livefyre comment widget, web annotations will allow users to form communities freely, and those communities can extend across any internet-connected document, whether in HTML, PDF, EPUB, or other formats.

This milestone sends an extremely strong signal to those who have developed proprietary annotation implementations, such as Genius, Readcube, Medium or Amazon (Kindle), that these technical recommendations have the weight of the web community behind them and can be relied upon. Our hope is that the standard will not only encourage others to adopt its technical approach, but also ultimately to open their platforms. When we buy a book from Amazon, why can’t we also join an annotated book club of our choosing, embed lesson plans throughout the text for a class, or share private notes with others?

This is just the beginning

Specifically, this announcement means that the data model, protocol and vocabulary for annotations have been agreed to by a diverse group of stakeholders. This is not a trivial accomplishment—simply coming to agreement about what an annotation is and what it isn’t represented a huge part of the challenge. Much effort was spent ensuring that the numerous potential use cases for annotation were covered by what was proposed.

But this standard is just the beginning in terms of the work required to get to a vibrant ecosystem of truly interoperable clients and services. What’s not covered are how users might annotate in groups or what kind of permissions can be set. Should replies be threaded? Can other users be followed? To help encourage these kinds of discussions, and also to support the implementation of this technology by publishers and others, in December of 2015 we formed the Annotating All Knowledge coalition, which now includes over 70 major publishers, platforms, institutions and companies.

The Coalition has assembled a further set of user stories, contemplated the levels of interoperability that might exist between implementations, and is committed to sharing the experience that members have in implementing annotation within their own environments. We welcome additional members, and interested parties should contact us. Also, many of these stakeholders will be at our annual annotation conference, I Annotate, May 4-5 in San Francisco.

In celebrating this achievement, it’s important to thank a number of people without whom we most certainly would not be here. Many too numerous to mention here have been involved, but those below deserve particular recognition for their essential role in this outcome.

Herbert Van De Sompel, of Los Alamos National Laboratory, who realized the potential of annotation and that the time was right to pursue a collective effort. His partnership with Tim Cole at the University of Illinois led to the Open Annotation Collaboration (OAC).

Rob Sanderson, Herbert’s colleague at LANL, who quickly became perhaps the most central figure in the entire standards effort. Without his hard work and persistence over many years, particularly towards the end as co-chair of the Working Group with Tim Cole, none of this would have ever happened. In particular, Rob’s quiet style and rare ability to bring sometimes passionate individuals to consensus was invaluable.

Don Waters, program officer at the Andrew W Mellon Foundation, who believed in Herbert and Tim’s vision and provided crucial early funding to support the work of the OAC.

Paulo Ciccarese and Tim Clark, who formed Annotation Ontology at Harvard, realizing simultaneously with Herbert and others that the time was right for a renewed effort. A serendipitous meeting led to the unification of their effort with the Open Annotation Coalition.

Todd Carpenter, of NISO, whose early workshops on annotation were the networking events where many of us got to know each other.

Nick Stenning, whose open source, AnnotatorJS, became the most widely adopted early implementation of a client server annotation architecture. This allowed many, including ourselves at Hypothesis, where he is now our lead developer, to have an excellent example to experiment with. Rufus Pollock and Philip Schmidt’s joint grant while active Shuttleworth Foundation grantees allowed Nick to focus for a time on that project.

Doug Schepers, who came up to me after an annotation presentation at Peter Brantley’s Books in Browsers conference and asked “should we form a community group for annotation under the W3C?” That chance encounter led to a subsequent invitation, and then the rapid progression from a community group to a working group in October 2014. Doug was our very vocal champion at the W3C, and I am deeply grateful for his support and his passion for this project.

Ivan Herman, the current primary staff contact at the W3C for the Web Annotation Working Group. Together with Doug, Ivan has been a steady and consistent advocate, and an essential part of this collective effort. Ivan is the one you call when you want a thoughtful perspective and solid counsel on how to navigate organizations and their individuals.

(Here’s a joint presentation by Doug and Ivan at the W3C meeting before I Annotate in 2014, where the move towards a formal working group was proposed.)

And of course Tim Berners-Lee, Director of the W3C, who saw the potential for this many many years ago, believed in the value of standardizing annotation, and endorsed and supported the effort early on. His blessing was essential.

At Hypothesis, we’re proud to have played a foundational role in bringing the people and organizations together that have helped make this happen.

We look forward to the hard work ahead.