A particularly compelling use case for annotation is within the world of journalism, fact-checking and civic engagement. The potential for community-controlled annotation layers over the web to facilitate collaborative investigations between experts and by citizens is unprecedented.

“There is far too much misinformation and disinformation polluting the public discourse over human-caused climate change. Climate Feedback provides a critical forum for true experts from within the scientific community to fact-check claims about the science and litigate the inevitable disputes that arise in media coverage of this politically-contentious topic.” 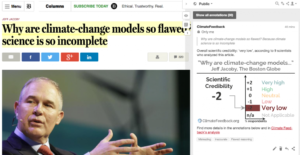 One group that is using Hypothesis in a particularly effective way is Climate Feedback. A non-profit effort run out of UC Berkeley, it represents a group of nearly 200 high-profile climate scientists that use web annotation to mark up climate change media articles, adding contextual information and highlighting factual inaccuracies and faulty reasoning.

Climate Feedback is paving the way for a new kind of fact-checking, crowdsourced directly among scientists with relevant expertise, providing in-depth analysis on a whole article, as well as “fact-checking” a number of claims at once.

Event: Journalism & Fact-checking at I Annotate 2017

Fact-checkers and journalists came together at the fifth-annual I Annotate conference to talk about how annotation is enriching the ways we produce and consume both news and facts.

Talk with us about adopting open annotation at your organization.

A coalition of some of the world’s leading publishers, platforms, libraries, educational institutions, and technology organizations are coming together to create an open, interoperable annotation layer over digital content.

Hypothesis just reached its 10 millionth annotation. Half of those have happened in the last year.

Hypothesis records 8 million annotations after widespread use of our LMS app in higher education.

Recording a million annotations every quarter, Hypothesis is now seeing exponential growth year over year, powered by educational use.