I’m incredibly excited — and deeply honored — to be joining the team at Hypothesis, where I’ll be leading marketing:

Telling the stories that engage people to add a new layer to the web. 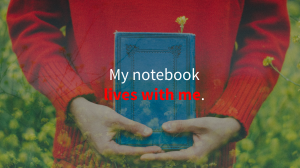 My first — very short — story for Hypothesis is about how the idea of a common platform for digital annotation first captured my imagination, embodied in the idea of a personal notebook. My notebook links to all the places online where I engage, but lives with me. Instead of being scattered across the world, my collected notes and references would be in just one place where I could always find them, flip through my pages, add new thinking, and — most powerfully of all — share and connect with other people. I started with this simple story, but Hypothesis and the people it connects are already telling many stories, with so many more to come.

Let me count the ways! I’m inspired to join Hypothesis because it hearkens to what speaks to me: an essential need that people recognize and will sustain.

Getting the story right is essential. To make the changes I want to see happen, I need to connect others to what matters to them. Story has always been a part of my work, but I’ve taken on so many things across my career that I’ve never been able to make story my primary focus. At Hypothesis, I’ll be joining an awesome team that’s already doing such great work that I’ll have the unfamiliar luxury to focus my efforts on making the story matter:

Why do we need annotation? How do we annotate? Who needs to know?

It seems like all paths were pointing me to Hypothesis. In true serendipity, I first learned of Hypothesis from a post by Marshall Kirkpatrick, the legendary digital journalist who went on to found the social media informatics company, Little Bird, where I radically transmogrified my skills and experience as part of their initial team. Next I moved to Lumen Learning, where we recognized how annotation could raise teaching and learning to new levels and were already piloting Hypothesis in combination with using open educational resources (OER) at scale in colleges and universities.

Looking back, I can see I’ve been devoted to expanding access to critical engagement with information from my academic studies — where I focused on how media and culture intermix — to each of my jobs — where my focus has always been to enable deeper engagement with information for a wider array of folks. It makes sense that I would get to Hypothesis, where we are working “to enable a conversation over the world’s knowledge”.

There’s going to be a lot of news from Hypothesis coming up and I’m thrilled to be a part of it! Want to learn more or get involved? Get in touch with me on Twitter, LinkedIn, or email.