This post was originally published on Cold Spring Harbor Laboratory Stories on 30 Sep 2019 and is reposted here with permission. See additional announcements on the PLOS blog and in an EMBO press release. 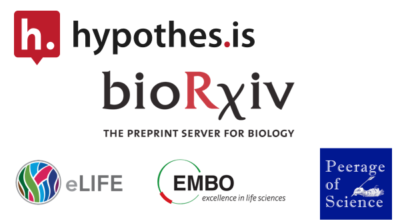 “The new project is part of broader efforts by bioRxiv to work with other organizations to help the scholarly publishing ecosystem evolve,” said John Inglis, co-founder of bioRxiv at CSHL.

The project is powered by the web annotation tool Hypothesis and will allow participating organizations to post peer reviews in dedicated Hypothesis groups alongside relevant preprints on the bioRxiv website. Authors must opt-in with the journal/service in advance. The use of restricted Hypothesis groups allows participating organizations to control the process and ensure that only reviews they approve are displayed. Readers will continue to be able to post their own reactions to individual preprints through bioRxiv’s dedicated comment section.

eLife and the EMBO Press journals, together with Peerage of Science and Review Commons, two journal-independent peer review initiatives, will be the first to participate. Several other groups plan to join the pilot later, including the American Society of Plant Biologists (ASPB) and the Public Library of Science (PLOS).

It is possible that reviews commissioned by a journal will be displayed alongside papers the journal ultimately chooses not to publish. EMBO Press journals will display peer reviews for manuscripts published in their journals. A consortium of multiple journals will also use it for Review Commons, a pre-journal, portable peer-review service that will be launched by EMBO and ASAPbio later this year.

“Posting Review Commons reviews and authors’ replies on bioRxiv will improve the transparency, objectivity, and efficiency of the peer-review process and empower authors to make the best choice for publishing their research quickly,” said Thomas Lemberger, Deputy Head of Scientific Publications at EMBO Press.

eLife is planning to use this functionality for a new process the journal would offer to peer review preprints without editorial triage for a limited period of time.

“bioRxiv already makes it easy for authors to submit preprints to journals and directs readers’ attention to online conversations around preprints,” said Richard Sever, Co-founder of bioRxiv at CSHL. “Transparent Review in Preprints expands this integration to peer review, promoting transparency and encouraging experiments by journals and other peer-review initiatives.”

“Using open annotation to bring reviews to preprints takes full advantage of its promise, namely the ability to layer diverse perspectives over original documents for the benefit of all,” said Dan Whaley, Founder of Hypothesis. “The scholarly process can only benefit when researchers can immediately know what they previously had no easy way to discover.”