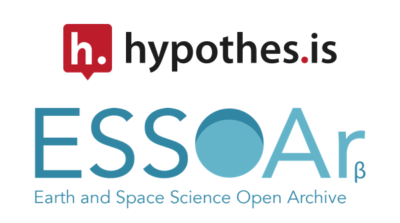 AGU, Atypon, and Hypothesis are today announcing the selection of Hypothesis’ open source annotation framework to provide annotation capabilities on the Earth and Space Science Open Archive (ESSOAr), the open discovery and dissemination service for early research outputs, including preprints and posters presented at major scientific meetings. Launch of the new feature is expected in early 2019.

ESSOAr, “a community server established to accelerate the open discovery and dissemination of Earth and space science early research outputs” is a joint initiative between the American Geophysical Union (AGU) and Atypon, with generous support for its initial development from Wiley, AGU’s publishing partner. First launched in February 2018, it provides researchers across the Earth and space sciences with a place to post preprints and posters on a freely accessible platform.

The ESSOAr integration of annotation with Hypothesis will take advantage of its new publisher group functionality, enabling ESSOAr to create a branded and moderated layer for conversation and collaboration across posted content.

The addition of annotation to ESSOAr will complement the growing number of preprint servers that have added annotation. “We’re excited to bring this powerful set of tools to researchers seeking early feedback on their findings,” notes Heather Staines, Director of Partnerships for Hypothesis. “AGU is a forward-thinking partner, always looking for new ways to utilize annotation as part of workflow, and the addition of preprint articles and other conference materials offers their community another way to share and collaborate.”

“AGU is committed to both accelerating the exchange of knowledge and facilitating collaboration within the scientific community. That’s why we are so excited about the growth of the ESSOAr community and possibilities that exist through this new partnership,” said AGU Executive Director/CEO Chris McEntee. “We’ve been using Hypothesis for peer review for some time now, and we’re very pleased to be able to offer this important tool to researchers further upstream in their workflow.”

“The focus on rapid dissemination through preprints is an important and growing trend in advancing science,” said Georgios Papadopoulos, Atypon’s founder and CEO. “A valuable dynamic of preprints is their suitability as a vehicle for providing feedback to researchers while articles are still in development. Atypon is excited to help contributors to the new Earth and Space Science Open Archive make their work even more available to feedback by offering standards-based open annotation through Hypothesis.”

To learn more about integrating collaborative annotation with your publications, contact us and subscribe to news from Hypothesis.

The Earth and Space Science Open Archive (ESSOAr) is a community server established to accelerate the open discovery and dissemination of Earth and space science early research outputs, including preprints and posters presented at major scientific meetings. The AGU and Atypon developed ESSOAr in a joint initiative with generous support from Wiley.

Journalists can find new research in Earth and space science, including manuscripts and conference posters, on ESSOAr. Journalists do not need to register to browse and read material in ESSOAr, but will need to create an account through ORCID to subscribe to email alerts about new content.

Please note that ESSOAr is a venue for sharing preliminary communications of new research for feedback prior to peer review. Data may be preliminary. These materials have not been peer-reviewed and could change substantially before final publication.

About the American Geophysical Union

The American Geophysical Union is dedicated to advancing the Earth and space sciences for the benefit of humanity through its scholarly publications, conferences, and outreach programs. AGU is a not-for-profit, professional, scientific organization representing nearly 60,000 members in 139 countries. Join the conversation on Facebook, Twitter, YouTube, and AGU’s other social media channels.

Atypon develops publishing technologies for getting mission critical content into the hands of the practitioners and researchers who need it most. Literatum, our online publishing and website development platform, gives content providers easy-to-use and automated tools to manage, market, and monetize every type of content that they distribute, from standards and scholarly articles to online courses and videos. Founded in 1996, Atypon is headquartered in Santa Clara, CA, with over 400 staff in 10 offices in the United States, Europe, and the Mideast.

Talk with us about open, social annotation.
<style