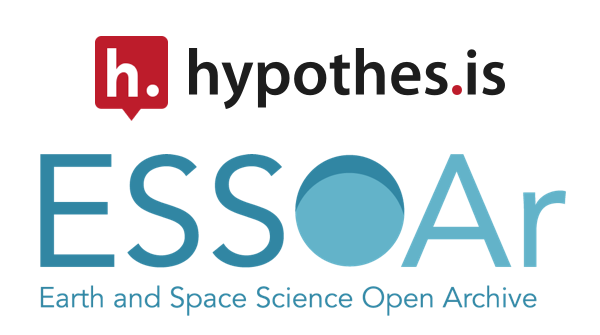 ESSOAr, a community server for the open dissemination of Earth and space science early research outputs, was launched in 2018 by AGU and Atypon, with support from Wiley.

The ESSOAr integration of annotation with Hypothesis takes advantage of Hypothesis’ new publisher group functionality. This enables readers to annotate across all content posted on the ESSOAr platform in a dedicated, moderated layer. Annotations can be private or public, and include text in any language, links, images, equations, or video, and each annotation can be the start of a threaded conversation anchored to underlying text. Annotations have unique web addresses (URLs) to enable sharing in other documents, emails, on social media, or generally as scholarly objects in their own right.

“AGU has long been an advocate of open science and providing the ability to annotate content across ESSOAr is a key part of facilitating early feedback of preprints and posters ahead of peer review,” said Brooks Hanson, AGU’s Executive Vice President of Science. “Researchers’ ability to collaborate on ESSOAr is always important, but especially critical now as our ability to engage in person has been reduced.”

With many scientific conferences postponed, ESSOAr is serving as a virtual poster hall for Earth and space science conferences where researchers can share their posters virtually. For more information email essoar@essoar.org.

The Earth and Space Science Open Archive (ESSOAr) was launched in 2018 to accelerate the open discovery and dissemination of Earth and space science early research outputs, including preprints and posters presented at major scientific meetings. AGU and Atypon developed ESSOAr in a joint initiative with generous support from Wiley. An advisory board made up of leaders and members of a diverse set of leading international Earth, space, and environmental societies guides ESSOAr’s development.

Journalists can find new research in Earth and space science, including preprints and conference posters, on ESSOAr. Journalists do not need to register to browse and read material in ESSOAr, but will need to create an account through ORCID to subscribe to email alerts about new content.

Please note that ESSOAr is a venue for sharing preliminary communications of new research for feedback prior to peer review. Data may be preliminary. These materials have not been peer-reviewed and could change substantially before final publication.

AGU (www.agu.org) is an international association of more than 60,000 advocates and experts in Earth and space science. Through our initiatives, such as mentoring, professional development and awards, AGU members uphold and foster an inclusive and diverse scientific community. AGU also hosts numerous conferences, including the largest international Earth and space science meeting as well as serving as the leading publisher of the highest quality journals. Fundamental to our mission since our founding in 1919 is to live our values, which we do through our net zero energy building in Washington, D.C. and making the scientific discoveries and research accessible and engaging to all to help protect society and prepare global citizens for the challenges and opportunities ahead.

Atypon develops publishing technologies for getting mission-critical content into the hands of the practitioners and researchers who need it most. Atypon’s online publishing and website development tools let publishers manage, deliver, and monetize all of the content they distribute—from standards and scholarly articles to video and online courses. Atypon’s tools for researchers let them easily author, discover, and access the content they need. Founded in 1996, Atypon is headquartered in Santa Clara, California, with over 470 staff in 9 offices around the world.

Wiley drives the world forward with research and education. Through publishing, platforms and services, we help students, researchers, universities, and corporations to achieve their goals in an ever-changing world. For more than 200 years, we have delivered consistent performance to all of our stakeholders. The Company’s website can be accessed at www.wiley.com.