John Perry, together with Gerry Percy, was Hypothesis’ founding (and till yesterday, active) board member. From the very beginning, he understood and believed in what we were trying to do, at a time when essentially no one else did. I loved him dearly, as did so many others, and I am forever grateful for the gift of his being that he so generously gave. I can only hope that we were able to return some small part of that favor to him in return.

Though I was first introduced as a college freshman to his voice in the dozens of lyrics he penned for the Grateful Dead, I first met Barlow (as he was affectionately known) in his bungalow perch in Mill Valley in 2010, with my good friend Rod Mann who also passed this last year. We recorded a brief interview with him, never released, but in it the questions we explored about what the internet could be at its best served as the basis for Hypothesis, and the crisp answers that John Perry gave provided a glimpse of his remarkable intellect. If one were going to pick an ideal guide and trusted ally for such an endeavor you’d be hard pressed to find better.

I was more than a bit surprised that he accepted the request to join our board — an offer which most sensible people usually refuse. His support, guidance and insights but most importantly his friendship and his affection over these last seven years have been steadfast and indispensable.

Many will write stories and biographies of John Perry Barlow, and do a much better job than I in capturing what must be one of the most truly iconic lives in American history, but even a simple list of his pursuits is worth repeating if for no other reason than the pleasure of stringing together so many unusual things in one sentence.

He was a cattle rancher, a poet, a rogue, a lover, a lyricist for the Dead, the author of the Declaration of Independence of Cyberspace, the founder of the Electronic Frontier Foundation, a cofounder of Algae Systems (one of the more interesting twists in his later life) and strange as it might seem to characterize him this way in these present times, both a treasure to the world and a true American at the same time.

Never in my life have I ever met someone that could capture extemporaneously and in so few words the essence of any given subject— even those about which he knew little. John Perry was the super power you always wanted with the incisive insight, the one line encapsulation and the wittiest of come-backs.

As was pedestrian for him, he immediately grasped what Hypothesis was about, and succinctly conveyed it in a keynote presentation at I Annotate in 2013.

“My dream is that we will create a time in which anybody anywhere can know as much as they are intellectually capable of assimilating about any subject as is presently known to all of humanity. That some kid in Mali can know as about some particular intricacy of proteonomics as he is capable of learning, because the information will be available to him.”

For him, this was intimately intertwined with his larger vision for the web. In 1996 he drafted the Declaration of Independence for Cyberspace during a spare moment at the World Economic Forum in Davos. I heard him on more than one occasion dismiss its importance as something he “came up with in a half an hour after several cocktails”, but that only serves as proof of how with one hand tied behind his back he was still worth ten of the rest of us.

“Governments of the Industrial World, you weary giants of flesh and steel, I come from Cyberspace, the new home of Mind. On behalf of the future, I ask you of the past to leave us alone. You are not welcome among us. You have no sovereignty where we gather.”

It’s hard to convey just how important Barlow was to the human story of how our cyberspace has unfolded. But if there was one moment that summed it up for me, it was during the W3C’s 2014 TPAC meeting, which was taking place in Santa Clara California, at a time when John was living in Palo Alto. I called him up and said he ought to come over if he was free. About an hour later he walked into the packed auditorium, strode right up to the stage and was directly and simultaneously hugged by Vint Cerf (TCP/IP co-inventor) and Tim Berners-Lee (inventor of the World Wide Web). I snapped a picture and it remains one of my favorites. 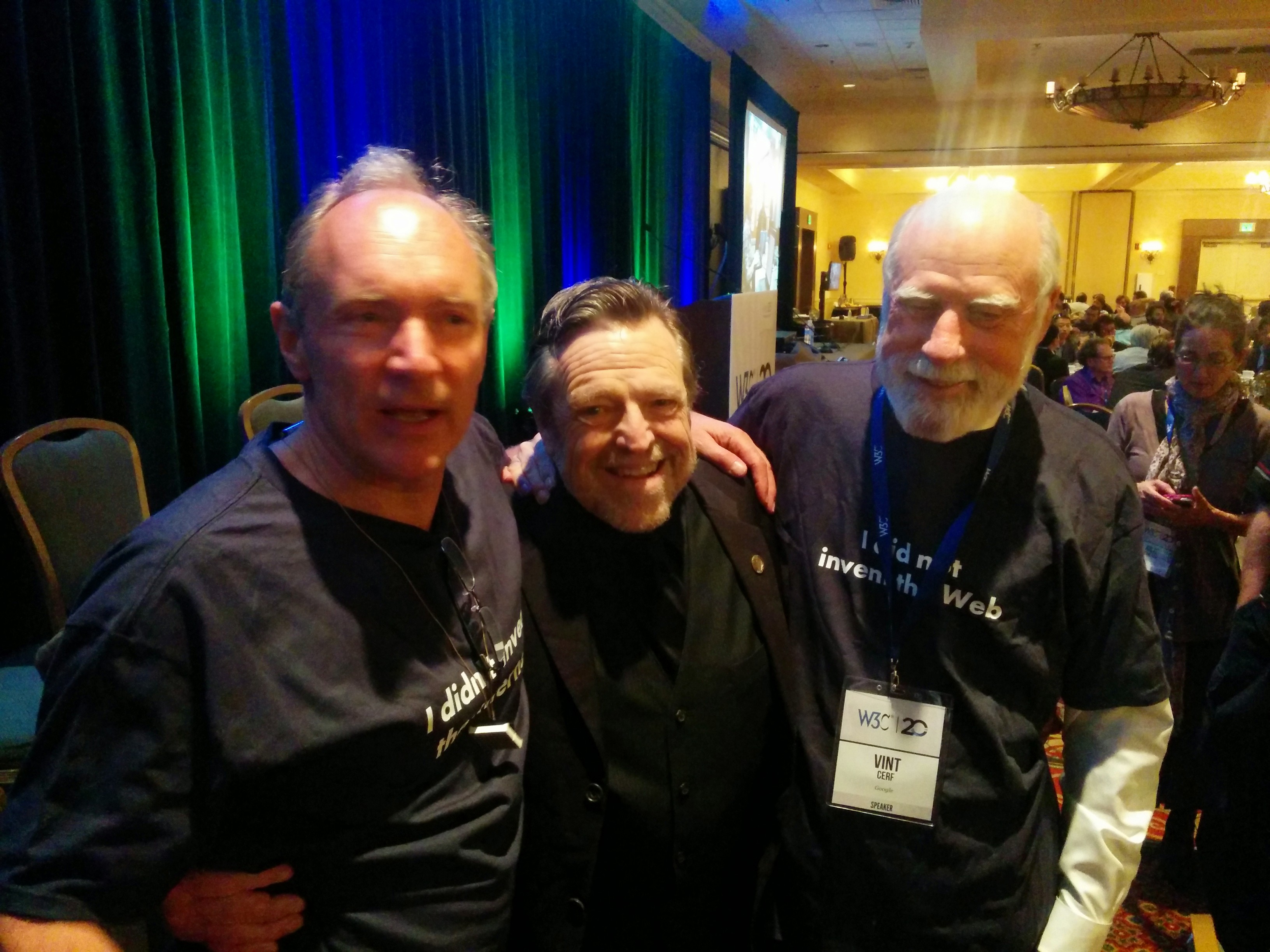 More recently, Barlow got crossed up with a nasty staph infection, and between painful surgeries and hospital stays, convalesced at Toad Hall, the San Francisco home of EFF and Sun Microsystems co-founder John Gilmore. Last month I dropped in to see how he was doing and he asked whether I could sneak out and buy him a couple rib-eye steaks and a four-pack of Red Bull. When I returned he promptly pulled a cutting board out, chopped up the fresh cuts, a raw onion, added some capers and shoveled the lot into a bowl and began to eat.

When I inquired about the strange concoction he said “Steak Tartare!” with a big grin, and pulled from his bottomless reserve of anecdotes. “I once ordered this at a restaurant back home in Wyoming and the rancher at the table next to me said ‘I’ve got cattle that are more dead than that thing on your plate.'” 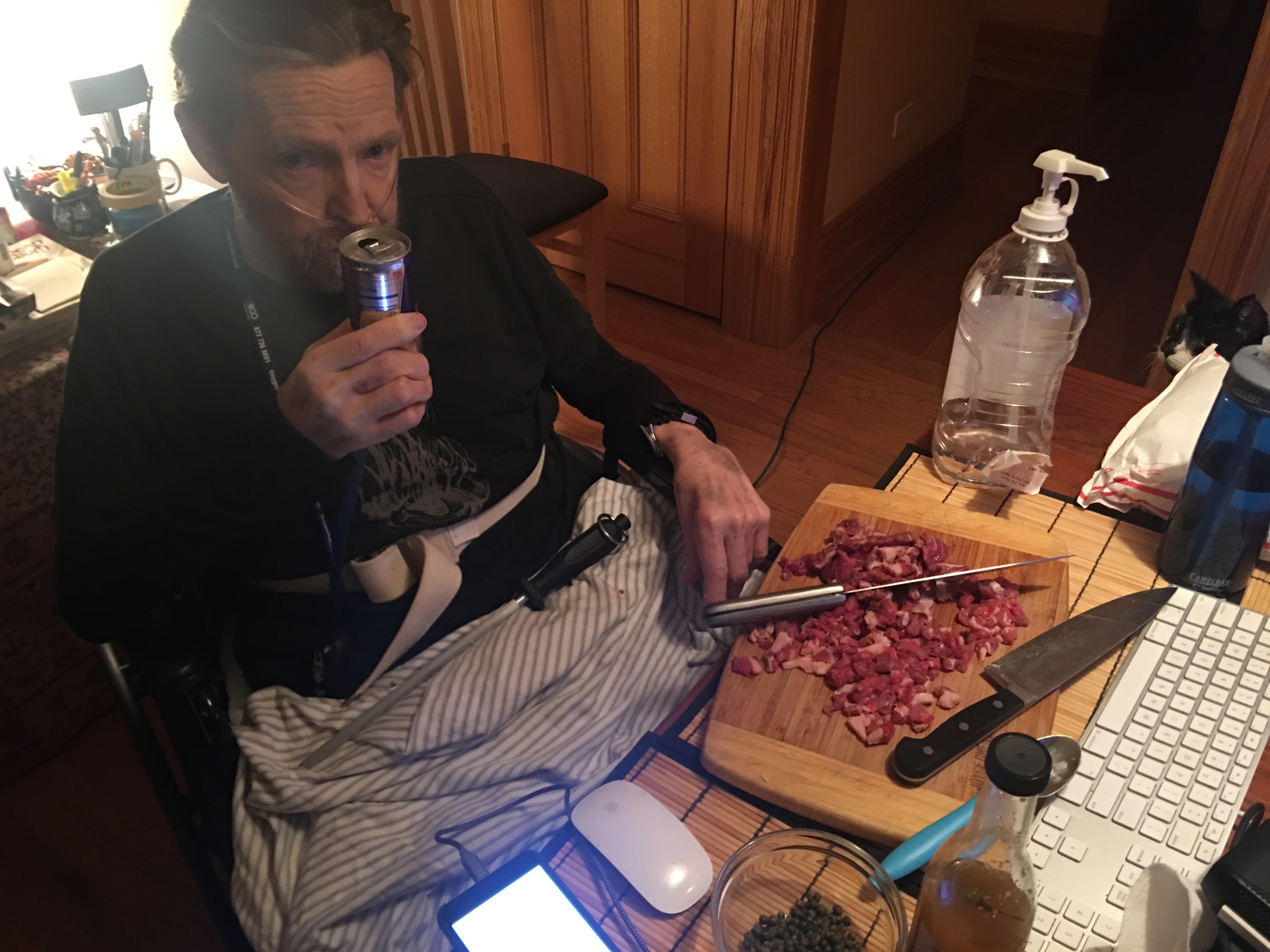 Goodbye my friend. Till we meet again.

View All Events
Community, Privacy, Security, Accessibility, and <a href="https://web.hypothes.is/education/anno