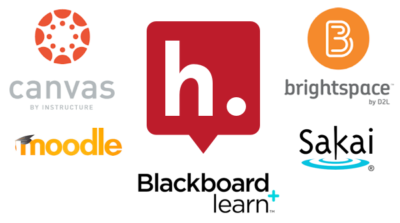 We are excited to announce the official launch of the Hypothesis LMS app. Thanks to the Learning Tools Interoperability (LTI) standard, Hypothesis now integrates with all major LTI-compliant Learning Management Systems, including Instructure Canvas, Blackboard Learn, D2L Brightspace, Moodle, and Sakai. We will be testing other platforms, including MOOC-providers like Coursera and edX in the coming weeks and months.

With this release, Hypothesis is better prepared to support the strong adoption we already see in teaching and learning. Students and teachers are a majority of the nearly 200 thousand annotators who have created over 4.3 million annotations using Hypothesis. The new LMS integration means teachers can bring collaborative annotation in their classrooms seamlessly as a part of their normal workflow.

The biggest feature of the Hypothesis LMS app is the introduction of Single Sign On (SSO) via the LTI standard. Even if you’ve never had to chase down 200 plus students to make sure they signed up for a third-party app used in your course, you can appreciate that this feature will make it far easier for students and teachers to get started using collaborative annotation.

The Hypothesis LMS app automatically provisions accounts for all students enrolled in any course using the app. This means that students can navigate to a Hypothesis-enabled reading and begin annotating without ever creating or logging into a separate account. Even better, the entire course roster of students and teachers will all be joined and annotate by default in an automatically-created private Hypothesis group that matches the course in the LMS.

In addition to enhanced ease-of-use for classroom implementation, SSO and automatic private groups increase the security and privacy of Hypothesis in an education context. Hypothesis itself is now storing less personal information about teacher and student users. And students and teachers can rest assured that their comments and conversations are as private as any other interaction within their LMS.

Next up we plan to add a grading feature in order to make it easier for instructors to evaluate and offer private feedback on student annotations. Whether and how a teacher grades student content in Hypothesis should be entirely up to them.

Learn more about the Hypothesis LMS app, access an installation guide for your LMS, and find other helpful information.

This app, and its extensions within and beyond the LMS, will be the basis for our education product moving forward. We will ask schools that begin to use our tool and services for collaborative annotation to join our Partnership Program and contribute to the sustainability of open annotation infrastructure. To ensure students and teachers get the most out of their Hypothesis experience, we’ve created a free Pilot Program for schools exploring collaborative annotation technology in support of teaching and learning.