Reuniting annotations with their targets in real time is core to the recently standardized web annotation model. This is fundamental to web annotation’s key benefits: that annotations lay over the web, can enable the collaborative annotation of documents like PDFs, can be searched and discovered across documents and websites, and, importantly, are under users’ control instead of publishers’.

This model has implications though. One of the most frequent questions we’re asked is:

“What happens to my annotation if the document changes?”

Hypothesis already deals with minor changes to a document thanks to our fuzzy anchoring algorithm, which can cleverly locate the original annotated selection even if it or its surrounding context has changed slightly or been moved around.

But sometimes documents change a lot.

If an annotation is anchored to a sentence in a paragraph and the whole paragraph is deleted, then even the smartest algorithm isn’t going to help—the original text is no longer present and that annotation will fail to anchor.

When annotations fail to anchor, we call them orphans (a name chosen by popular vote!). 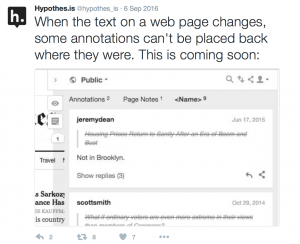 Before now orphans were not shown in the Hypothesis sidebar, we simply hid them from view. This had a number of consequences. First, that when you returned to the page, it would seem like annotations you had made before were gone, even though they were still discoverable from your profile. Second, a shared direct link to an orphaned annotation would simply not show in the sidebar, even though the annotation still existed.

Back in September of last year, we announced the development of a new feature to address this problem.

With the orphans tab now released in version 1.2.0 of the Hypothesis client, if an annotation is created that no longer has an anchor, it will appear in the orphans tab. When orphans are present, this tab will be visible at the top of the sidebar, next to the Annotations and Page Notes tabs.

Most pages aren’t very dynamic, and therefore won’t have any orphans. In these cases, the orphans tab will not appear.

You can check which version of the Hypothesis client you are using under the Help menu. If you are using the Chrome extension and your version is lower than 1.2.0, try restarting Chrome to update automatically.

This new orphans feature gives annotations another level of independence in relation to document changes. This is a core tenet of the Hypothesis mission, and one that we will look to expand upon. For instance, we have been experimenting with and blogging about ways to archive pages when they’re annotated, so that orphans can be reunited with previous versions of a text.