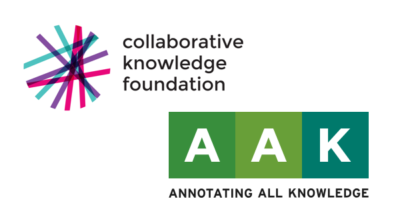 The Annotating All Knowledge Coalition members gathered in Berlin ahead of the FORCE2017 meeting with more than fifty others from across the open tools, researcher, and publishing communities. The Kalkscheune, a restored factory, provided room for presentations, demonstrations, networking, and more. Originally constructed in 1831, the building takes its name from Kalkscheunenstrasse, where lime for building purposes was stored. Industrialist Johann Caspar Hummel set up a machine factory on the site. Check out Adam Hyde’s photos from the day.

The Open Source Bazaar, co-hosted by the Collaborative Knowledge Foundation and Hypothesis, offered a full day of programming, including project update presentations in the morning and panels and unconferencing time in the afternoon. The meeting kickoff looked at the following themes: Community (engage with the full array of players), Diverse Ecosystem (move away from monolithic single solutions, tool builders working together in a “many to many” manner), and Re-use (we currently don’t always build with re-use in mind). Kristen Ratan and Dan Whaley provided roadmap updates for their respective projects. Attendees heard from Jure Triglav about advances with the PubSweet and Editoria tools. Dan brought folks up to date about the creation of Hypothesis’ Publisher Groups capability — which enables branded and moderated annotation layers across publisher content, the continuing effort to federate the client/server architecture, and advances in machine-generated/human-curated annotation.

To learn more about adopting open annotation in your own publications, contact Heather Staines, Director of Partnerships at Hypothesis and subscribe to news from Hypothesis.

Among the open tool presenters were:

During lunch, a demo area was created for a number of annotation projects to show off their newest features. Stations included: eLife (Hypothesis), PaperHive, Pundit, SciLite, SciBot, and more.

The AAK-sponsored afternoon panel focused on making annotations FAIR (findable, accessible, indexable, and reusable). You can find the slides here.

Maryann Martone gave an overview of the attributes of annotations that previous AAK meetings had identified as being relevant for the FAIR guiding principles. She focused on how annotations can themselves be made FAIR and also on how annotations make other research objects more FAIR. Her slides detail how it is necessary that annotations be identified in a unique and persistent manner and how critical a variety of rich metadata will be to meet all aspects of the FAIR principles. Maryann also briefly updated attendees on the SciBot project, which creates annotation cards for RRIDs (Research Resource Identifiers), which she had demoed during the lunch break.

Next, Francesca Di Donato, of Net7 and the Pundit, presented about putting annotation fairness into practice, detailing the Go(FAIR) initiative and the European Science Cloud (EOSC), an effort to support Open Data and Open Science in Europe. She explained the three main processes: Go-Change, Go-Train, Go-Build.

Johanna McEntyre of Europe PubMed Central updated us on Annotation for Literature Data Integration, with a particular focus on how curation makes data FAIR. She provided rich examples from the SciLite project which includes community curation and auto-generated annotations.

Jennifer Lin of Crossref wrapped up the panel with a talk about tracking and transparency around annotation data. Hypothesis public annotations have been contributed to the Crossref Event Data project since June 2017. There is a new type of DOI that can be used for reviews and annotations.

Participants enjoyed a cake commemorating the 2-millionth annotation on Hypothesis, an event which had occurred a few days earlier. Afternoon unconference topics included Annotation for Publishers, Collaborating with Open Source Tools, and Workflows. After the Community Meeting ended, attendees joined other FORCE2017 registrants for a social at the nearby Amano Bar.

A hearty thanks to all who participated, particularly the presenters. A special thanks to John Chodacki and Peg Fowler who were instrumental in the planning and logistics of the event.

For more information on the Annotating All Knowledge Coalition, please contact Heather Staines at coalition@hypothes.is. Follow us on Twitter @AAKCoalition and join the AAK Force Working Group.