This post was originally published on eLife on 31 Jan 2018 and is reposted here with permission. 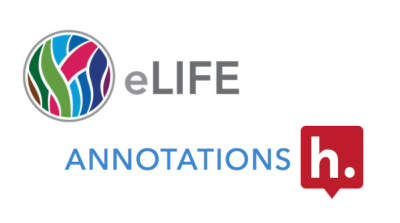 eLife, in collaboration with Hypothesis, has introduced open annotation to enable users of its website to make comments, highlight important sections of articles and engage with the reading public online. The open-source Hypothesis software has been extensively customised for use by eLife and other publishers with new moderation features, single sign-on authentication and user-interface customisation options now giving publishers more control over its implementation on their sites.

eLife is a non-profit organisation that aims to help scientists accelerate discovery by operating a platform for research collaboration that encourages and recognises the most responsible behaviours in science. An open-access journal for the most promising advances in life science and biomedical research, eLife is also a platform for experimentation and showcasing innovation in research communication. The partnership with Hypothesis was announced in 2016 as an important advancement toward this goal.

Hypothesis is a California, USA-based organisation that develops open-source software with the power to create a conversation layer over the entire web. The implementation of the annotation tool on eLife’s website means users can now make notes on all content, from research articles and commentaries to magazine articles and blog posts. All they need to do is sign in using an ORCiD iD to add or reply to public or private annotations.

Giuliano Maciocci, eLife’s Head of Product, says: “We worked closely with Hypothesis to expand its original platform into a more versatile annotation experience that can now be integrated seamlessly into publishers’ websites. The platform’s new feature set includes an extensively reworked user interface that simplifies the annotation and discussion experience for our users. We have also added improved moderation and authentication features, giving publishers more control over how annotations are deployed on their sites, and which should result in higher-quality discussions around published scholarly content. With these new features now being live, we’re delighted to already be seeing new publishers adopt the platform as a result of this collaboration.”

Recently, the scholarly publishing platform PubFactory and content solutions provider Ingenta integrated the revamped Hypothesis service into their websites. HighWire and Silverchair are also offering their publishers the opportunity to implement the service, and eLife and Hypothesis hope more publishers and platforms will follow.

Heather Staines, Director of Partnerships for Hypothesis, adds: “The increasing pressure to speed up the sharing of research, combined with the growing emphasis on open science and open data, makes it more crucial than ever for people to be able to access and discuss new research findings openly. Both eLife and Hypothesis share a common goal in developing open-source software to facilitate such communication, and we’re pleased to deliver a service that can be adopted easily by publishers. We hope many more will take advantage of the opportunity to provide their users with this new and exciting way of engaging with published content online.”

Hypothesis’ work with eLife is supported by the eLife Innovation Initiative, a program introduced to provide dedicated, strategic guidance to the organisation’s ongoing efforts to create new technology and services to enhance research communication and discovery.

To view examples of eLife research articles that have been annotated using the Hypothesis tool, see:

Publishers wishing to implement the tool and take advantage of its latest features can do so by contacting Heather Staines, Hypothesis’ Director of Partnerships, at heather@hypothes.is.

For more information about the development of the newly customised tool, visit: https://elifesciences.org/labs/3f85f8c2/enabling-scientific-discussion-on-elife-with-hypothesis

For more details about eLife’s partnership with Hypothesis, see: https://elifesciences.org/for-the-press/7e7220f6/elife-partners-with-hypothes-is-to-advance-open-scholarly-annotation

eLife is a non-profit organisation inspired by research funders and led by scientists. Our mission is to help scientists accelerate discovery by operating a platform for research communication that encourages and recognises the most responsible behaviours in science. eLife publishes the most promising research in all areas of the life and biomedical sciences, as identified by the working scientists who serve as our editors. We also invest in innovation through open-source tool development to accelerate research communication and discovery. eLife is supported by the Howard Hughes Medical Institute, the Max Planck Society, the Wellcome Trust and the Knut and Alice Wallenberg Foundation. Learn more at elifesciences.org.