2017: A Remarkable Year for Annotation

2017: A Remarkable Year for Annotation 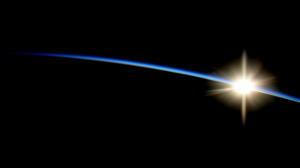 Sunrise from the International Space Station by NASA/Reid Wiseman, 28 Oct 2014, in the public domain.

At this winter solstice, as our planet changes its tilt again on its way around the sun, we are taking the time to recognize everything Hypothesis and our community have accomplished in 2017, and to look ahead to some of the first things we’ll do in 2018.

Mark your calendar to attend I Annotate 2018 in San Francisco, Wednesday 6–Thursday 7 June. We’ll announce more soon about the program and special events before and after the main gathering.

Students and teachers fueled the dramatic growth of open annotation in 2017. It’s no surprise that our millionth annotation was made by a California high school student — just one of the huge number created by students and educators who use annotation in direct, social engagement on texts in humanities and science classrooms, as well as in broad scholarly conversations. In 2018 we plan to extend annotation in teaching and learning through a new integration with the major learning management systems (LMS) widely used in higher and secondary education, built from lessons learned in our 2017 pilots with schools using Instructure Canvas.

This year Hypothesis broke through as an essential component in the open toolchain that is spreading across publishing as a common strategy. In 2017 Hypothesis established partnerships with AGU, bioRxiv, eLife, HighWire, Ingenta, MIT Press, Open Therapeutics, PubFactory, QDR, and Sliverchair. At the same time, we’ve continued our collaborations to advance scholarly practices with organizations like AAAS, Crossref, the Initiative for Open Citations, NYU Press & Libraries, ORCID, and our participation with over 70 companies and organizations in the Annotating All Knowledge Coalition. In early 2018 we’ll be announcing more new partnerships with leading publishers and platforms.

Register now to attend our free webinar: Implementing Hypothesis for Publishers on 11 Jan 2018.

We’ve been working in 2017 to harness open annotation to improve the quality and credibility of news, from scientists fact-checking climate news with Climate Feedback, to investigative journalists covering massive document leaks in the European Investigative Collaborations, to programs empowering students in media literacy with the Digital Polarization Initiative, to our work with MisinfoCon’s Credibility Coalition building new mechanisms to evaluate news. In 2018 we plan to expand annotation to other communities of experts coming together to improve journalism and news.

In 2017 Hypothesis has continued to expand the use of open annotation among scientists and scholars in research and peer review, and through our collaborations with ClinGen, FORCE11, Gigascience, the GO FAIR data initiative, the Neuroscience Information Framework, and SciBot. Our major focus in 2017 was to connect annotation to scientific research through integration with metadata and unique identifiers like Crossref events, DOIs, ORCIDs, and RRIDs. In 2018, we look forward to participating in several new projects funded by major grants that will augment scholarship with annotation.

New capabilities supported our growth in annotation and partnerships in 2017. Over the year, we moved to more secure and flexible OAuth authentication, collaborated to extend open annotation to EPUBs — the third most common web publication format after HTML and PDF —  and released new capabilities for moderation and to handle orphaned annotations when content changes. New integrations extended the reach of open annotation, like our partnership with the Internet Archive to make it possible to annotate news video in their extensive collection and easily embed video news clips in annotations. We also launched publisher groups, a new Hypothesis configuration that enables publishers to establish and manage a default branded and moderated annotation layer to increase reader engagement, enhance content, and focus attention on the version of record. In early 2018, we plan to release new group configurations that will enable more combinations of collaboration and sharing.

In May 2017, people came to San Francisco for the largest I Annotate conference yet, hearing Esther Dyson deliver the keynote at what has become the flagship gathering for annotation technologies and practices. In February, Hypothesis collaborated with the Hewlett Foundation to convene the Open Education Tools Summit in Palo Alto, and in October the Annotating All Knowledge Coalition joined forces with the Collaborative Knowledge Foundation to host the Open Source Bazaar in Berlin prior to the Force2017 meeting.

Throughout rest of the year, Hypothesis was all over the world, attending conferences and meetings for AAP’s PSP in Washington DC, AAUP in Washington DC, ASA in Chicago, ALPSP in the Netherlands, Biocuration in Palo Alto, the Charleston Library Conference, COASP in Lisbon, CredCo in New York and San Francisco, the Digital Humanities Summer Institute in British Columbia, DigitalNow in Orlando, Domains in Oklahoma City, DPLAfest in Chicago, EDUCAUSE in Philadelphia, EDUCAUSE ELI in Houston, FORCE11 in Berlin and its Summer Institute in San Diego, the Frankfurt Book Fair, HighWire Publishers in Palo Alto and Washington DC, HIRMEOS in Berlin, INCF in Oslo, InstructureCon in Colorado, ISTE in San Antonio, the London Book Fair, MisInfocon in Boston and London, Neuroinformatics in Kuala Lumpur, NIH in Washington DC, NFAIS in Washington DC, NMC in Boston, Open Education in Anaheim, QUEST in Washington DC, SFN in San Diego and Washington DC, SSP in Boston, STM in Frankfurt, Washington DC and London, TCEA in Austin, the TPAC Summit in California, and UKSG in Harrogate. We hope to see you at one of the many gatherings we’ll attend in 2018, and at I Annotate, 6–7 June in San Francisco.

The Hypothesis team made big changes in 2017. A year ago we added new people to increase our outreach: Heather Staines, Director of Partnerships, and Nate Angell, Director of Marketing. Last Spring, Andrew Hedges, our new Director of Engineering, and Dawa Riley, Hypothesis’ first UX Design Lead joined, contributing new experience to our product team. We are excited to welcome three more new members to our product team in January: Hannah Stepanek, Katelyn Lemay, and Lyza Danger Gardner, and we’ll also be hiring again soon. Learn more about everyone that makes Hypothesis happen.

Hypothesis has also been extending our reach online in 2017, launching a redesigned website and starting a new series of webinars on annotation for educators and publishers. View recordings of any events you missed and sign up for our next series in 2018, including webinars with our partners like HighWire, Ingenta, Instructure, PubFactory, Silverchair, and more. You can also browse media coverage we’ve collected about Hypothesis and open annotation.

Looking for more ways to connect? Follow us on Twitter, Facebook or LinkedIn or chat about Hypothesis in our open Slack community or about annotation in general in the Annotating All Knowledge Slack.

Thanks to everyone who helped make 2017 a stellar year for Hypothesis and open annotation — we did it together! May your days or nights grow longer as our planet takes another tilting trip around the sun.

Join OLC Innovate 2021 keynoter Dr. Rajiv Jhangiani and the AnnotatED community for a free pre-conference workshop on social annotation and a special episode of Liquid Margins.